A routine inspection of the work by a Health and Safety Executive (HSE) inspector found that the separation distance between the new timber frame building under construction and an adjacent occupied care home was insufficient.
As a result, had the timber frame caught fire there was a serious risk that the radiant heat would cause the fire to spread to the care home, putting the lives of residents and staff inside at risk.

HSE found that there was nothing in the design specification produced by the architects to alert construction workers erecting the timber frame to the additional fire risk it created, and the need to take action accordingly.
The court was told that it would have been reasonable for the firm to have specified in its design that fire-resistant timber be used or that it considered the sequence of construction so that the timber frame of each floor was clad before the next one was constructed, reducing the amount of timber exposed at any one time.

They were fined a total of £1,500 after pleading guilty to two breaches of the Construction (Design and Management) Regulations 2007. The company was also ordered to pay £816 costs.

Speaking after the case the HSE inspector said: “Timber frames will burn faster and more completely when the panels are incomplete and not yet protected by the usual internal fire-resistant plasterboard and external cladding.
“When burning, exposed timber frame structures generate a lot of radiant heat and there have been a number of large and serious fires which have affected neighbouring properties with devastating consequences, though thankfully without loss of life.
“There was a real danger here that had there been a fire it could have spread to the adjacent care home, putting the lives of the residents and staff inside at risk. The firm failed to consider this risk in its design and failed to provide sufficient information to the contractors to enable them to carry out the construction safely.”

A man delivering construction materials to a high-rise site in New York died in a freak accident yesterday when a tape measure fell from the building’s 50th floor and hit him on the head.
The man was delivering materials to a high-rise building under construction.
Police said he stepped out of his lorry but left his hard hat inside.
As he walked toward the building a tape measure fell from the belt of a worker on the tower’s top floor.
Police said it struck a piece of metal about three metres from the ground and ricocheted into the man’s head.
The City Public Safety Director said: “Upon preliminary investigation, it appears to be a very tragic accident and construction work was stopped at the site after the accident.”
The luxury high-rise, which is nearing completion, is part of a development that includes a hotel and two additional rental buildings, one of which already has all of its 400 apartments leased.

A builder has been fined after two of his workers were photographed on a house roof without safety measures in place.
He was prosecuted by the HSE following the incident at a semi-detached house.
The Magistrates’ Court heard a passing HSE inspector spotted the men installing a dormer window for a loft conversion at the property. He was inside the house and his two workers were close to the chimney on the outside, without any scaffolding or other safety measures to prevent them from being injured in a fall.
He was fined £2,000 and ordered to pay £400 in prosecution costs after pleading guilty to a breach of the Work at Height Regulations 2005.
Speaking after the hearing, the HSE Inspector, said: “It’s astonishing that the builder was prepared to carry out a construction project that involved major roof work, without putting safety measures in place to protect the people he employed.
“While he worked safely inside the house, the lives of two men were being put at risk as they clambered about on the roof. The work simply shouldn’t have been allowed to go ahead without the use of scaffolding or other safety equipment.
“The risks from working at height are well known in the construction industry. It is therefore only luck that no one was injured on this occasion.”

A building firm has been fined after it ‘turned a blind eye’ to potential asbestos hazards being faced by its workers, who were converting an old pub into flat.
The Magistrates were told that concerns about health and safety on the site were raised by local people, who were also worried about the risks to passers-by.
An Inspector from the HSE visited to check conditions, and enforcement action regarding unsafe work at height and inadequate fire precautions was taken against the builders that day. The firm was also asked to provide information about how they were managing the asbestos risks on site, but HSE heard nothing from them.
As a result, HSE visited again and served an improvement notice on the company, giving them four weeks to provide the workers with the training they needed to enable them to identify materials that might contain asbestos if found during their refurbishment works, and to know  how to deal with it correctly. The deadline was later extended by a week.
The builders failed to comply and, despite assurances to the contrary, its failure to comply persisted, remaining in breach of the notice right up to the date of the prosecution.
They were fined £2,000 and ordered to pay £4,500 in costs for breaching the Health and Safety at Work etc Act 1974.
After the hearing, the HSE Inspector said: “The improvement notice was straightforward. It was simple and inexpensive to comply with, by providing training to employees liable to be exposed to asbestos.
“If the company had any doubts or questions, it had ample opportunity to ask them and I would have done all I could to help. Instead it apparently buried its head in the sand.
“As well as not meeting the extended deadline, the company continued in its failure to provide any evidence of compliance at any time during more than a year. It seems the builders just turned a blind eye to its responsibilities.”

A Roofing Specialists Company was handed a £9,000 fine plus costs of £1,500 at Crown Court, after pleading guilty to four breaches of health and safety legislation
The Health and Safety Executive for Northern Ireland (HSENI) brought the case in relation to an incident that took place in 2013.
A 54-year-old employee of the company suffered multiple injuries after falling over three metres through asbestos cement roof sheeting. The roofing company had been contracted to strip the roof sheets from a large garage.
The incident occurred as a result of an unsafe system of work combined with a lack of onsite supervision. The HSENI investigation found that none of the simple and commonly available measures to prevent workers from falling, such as netting or airbags below the roof, were in place.
Neither did the company use a mobile elevated work platform inside the garage, which would have allowed the workers to access all areas of the roof quickly and safely from below.
A suitable and sufficient risk assessment had not been carried out before starting the work, which if completed would have set out how to remove the asbestos roof sheets safely. Neither had it provided adequate training for its employees who could have been exposed to asbestos fibres or taken the necessary precautions to limit the exposure to asbestos.
After the hearing, the inspector with HSENI’s major investigation team, said: “The dangers of working at height are well known and the law requires all employers to control the risk of injury to their workers. A range of methods are available and suitable protection measures must always be put in place to prevent injury to workers from falls from height.”
She added: “The dangers of asbestos are also well known. There is no safe level of exposure to asbestos and the correct procedures for working with it are long established. It is a legal requirement that contractors understand and follow procedures to prevent the spread of and exposure to asbestos.”

A construction firm has been fined after it ignored repeated warnings about safety at a building site for a row of terraced houses.  HSE said that the case should act as a warning to other firms who will find themselves in court if they fail to take action upon notices issued against them.
The firm was prosecuted by HSE after it continued to stack bricks on scaffolding without measures in place to stop them falling and injuring people below.
It was heard in Court that an HSE inspector had identified the issue on a visit to the building site for ten new terraced houses.
She noticed that the bricks were being stored on the scaffolding platform above the height of the toe board, which meant there was a risk of them falling if they became dislodged.
The inspector served the company with a Prohibition Notice requiring the bricks to be stored at ground level or for brick guards to be used. She returned to the site on three occasions,  but on each occasion bricks were still being stacked on scaffolding platforms, with no measures in place to prevent them from falling.
The company was fined £10,000 and ordered to pay £1,445 in prosecution costs after pleading guilty to a breach of the Health and Safety at Work etc. Act 1974 after failing to comply with a Prohibition Notice.
Speaking after the hearing, the HSE said: “If one of the bricks had fallen from the scaffolding and struck someone on the ground below then they could have suffered serious head injuries.
“We gave the construction firm several opportunities to improve safety, returning to the site on three separate occasions after my initial visit, but bricks continued to be stacked unsafely on scaffolding.
“This case should act as a warning to other construction firms. The notices that HSE issues are legally enforceable and companies will find themselves in court if they fail to take action.”

This guidance now applies. It is for anyone who has duties under the safety provisions of the Explosives Regulations 2014, particularly employers, private individuals and other people manufacturing explosives, storing larger quantities of explosives or storing explosives that present higher hazards.

It provides overarching guidance on how the safety provisions of the Regulations should be met, and is supported and supplemented by subsector guidance.

This publication should be read alongside L151 The Explosives Regulations 2014 – Security provisions.

The main changes to the regulatory framework include:

Hand-arm vibration or HAV is a widespread hazard for employees in many industries and occupations. This second edition of L140, published by the HSE, outlines what an employer’s duties are under the Control of Vibration at Work Regula.. 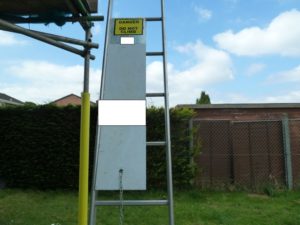 Fine after 12-year-old fell from ladder at unsecured site Contractor Westdale Services Limited has been fined £160,000 after a 12-year-old boy slipped off a scaffold ladder on an inadequately guarded site. On 6 May 2017, two boys were abl..

Welcome to the March 2019 newsletter and legal update This issue at a glance: SMSE "new website - it's here" DSE Assessment ..